From sunrise to sunset, tribeswomen trek for miles and dig for water with their bare hands as the worst drought in decades shows no sign of abating in desolate northwestern Kenya.

It’s supposed to be the rainy season but the once wide and flowing river beds are dried up and thousands of animals have died. All that remains are the sturdiest of camels, goats and donkeys.

The Turkana tribe, who live in this remote and inhospitable land, see it is a woman’s job to provide water. Four years since the last substantial rainfall, that role has become deadly.

MailOnline visited a struggling community – living roughly 100 miles from the tourist hotspot of Lake Turkana – and heard how a woman was recently killed when a 14-foot water hole she dug collapsed and trapped her.

Turkana culture does not permit a dead body to be moved because it’s considered cursed so the woman was still buried at the bottom of the pit that was supposed to be her family’s lifeline.

Here women, including those that are pregnant, walk around 12 miles each day in an unimaginable quest to find water in one of the driest places on earth. If successful, they carry 20-litre cartons atop of their heads back to their children, husbands and animals. A family has an average of 10 children.

In the village of Labei, we encountered young women, adorned with beautiful colourful neck beads and their trademark mohawk-style haircut, carry out the exhausting work of lifting water up to the surface from a 12-foot hole they had dug with their hands and a small spade.

At the top of the hole, men and children poured buckets of the pungent water into makeshift troughs for the camels, goats and donkeys to drink from. These animals are the nomadic tribe’s livelihood.

In their polygamous society, camels are used as dowry when a man wants to make a woman his wife. Men take as many wives as they can afford and girls are believed to be ready for marriage as soon as they hit puberty, despite Kenyan law stating both men and women must be 18 before they can wed.

Meanwhile, goats – and their blood – are a main food source for the tribe.

The animals can also be sold for weapons, which are now much needed to protect the tribe from livestock raids by other groups. Men in the village, which is more than 50 miles southeast of a flowing river in the town of Lodwar, are having to trek as far as the Ugandan border to graze their animals and conflicts have occurred.

We spoke to a mother-of-eight named Nakunyuko Lomaritoi, with the help of the local government chief Simon Moya acting as a translator, who told us how she had recently lost her daughter for two days while she was out searching for water.

‘I have 46 donkeys and drive them for three miles to get water,’ she explained. Remarkably in this arid landscape, the child was found alive and the pair were reunited.

Another family’s story had no such happy ending. One father told us how his son died when they were out grazing their goats away from home and ran out of water.

Incidents of male suicides have also been reported, along with thousands of animal deaths. Many of the tribe are unaware of the concept of climate change and still believe that there is a curse and a sacrifice is needed to cure the drought.

During MailOnline’s meeting with this community, we saw the striking effect dehydration was having on the tribe’s children. They appeared listless and laid under the tree in the shade, too lethargic to even swat away flies.

‘Children have cooked blood from camels and goats for their daily meal,’ Chief Simon said. ‘Morning to sunset people are fighting for water,’ he added.

The current average life expectancy in the region is around 50 years old.

In stark contrast to the desperate scenes in Labei, the following day we visited a project that has offered hope to some Turkana people as the rains show no sign of returning. 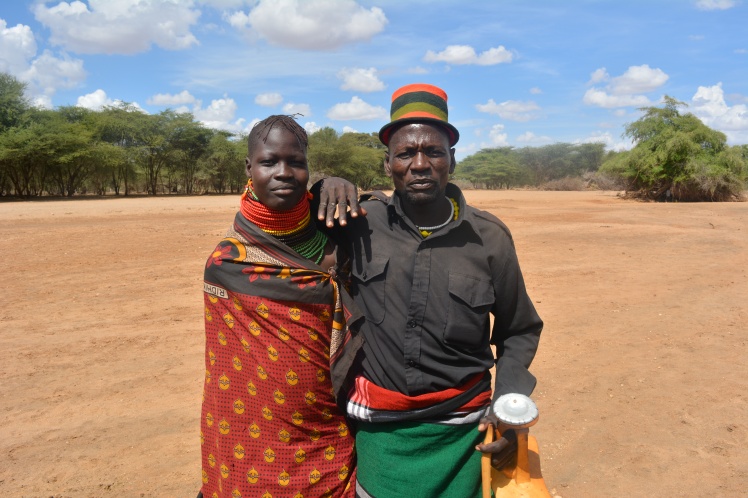 British charity the Society for the Protection of Animals Abroad (SPANA), which helps working animals around the world and the communities that rely on them, have stepped in to help by providing a £45,000 solar-powered borehole.

Located a bone-rattling two and a half hour drive from the small town of Lodwar, the community fortunate enough to receive the lifeline are rarely visited by aid groups because of their extremely remote location.

The 110-metre borehole is deep enough to reach the water table and is providing fresh, clean water for 4,200 people and 9,000 animals. This is thousands more than first estimated.

As we pulled up to the borehole, women surrounded our cars dancing, singing and ululating in a loud and colourful welcome. Inquisitive children stared, pointed at our cameras and giggled as we showed them their photos. Even the men, holding their traditional canes and the small wooden stools they use as seats and pillows, broke out into a performance of thanks.

‘This water has improved their lives,’ said Chief Simon. ‘The kids used to stay here alone along the dry river until the evening when their mothers came back with water – now they can stay together,’ he explained.

The women dressed in colourful robes, including married ladies marked out by the silver rings around their necks, described how they can now wash again and take pride in their appearance.

The tribe sleep in huts, called manyattas, made from leaves and adorned with animal hides. Women reside in a hut with their children, while a husband has his own hut for women to visit him.

One mother sparked laughter among the whole group as she told us: ‘Men used to be tired when they came home without water but now the family unit is happier… husbands used to disappear but now they come home.’ 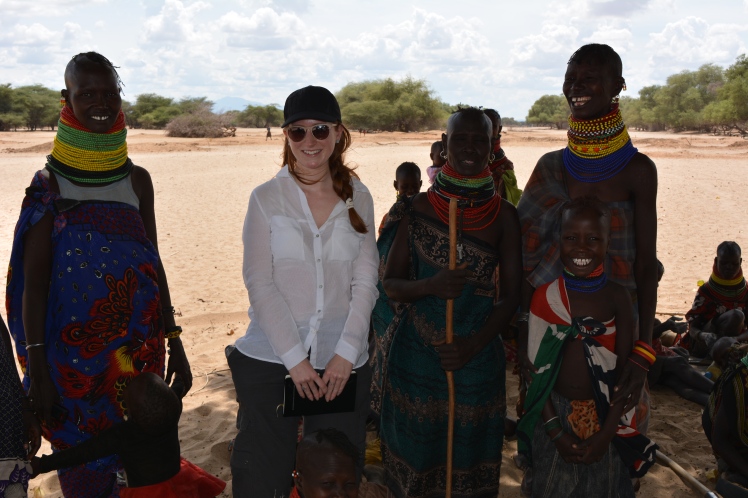 A water committee, made up of five local men and four women, has been formed to manage the borehole and they have agreed to a yearly fee of 500 Kenyan shillings (£3.80) per household to maintain it. The solar-powered technology is not just environmentally sustainable but also low maintenance.

One woman on the committee, Awesit Naukay, said: ‘Now we share water with our neighbours when we used to fight with them, they used to raid our livestock and take them away.

‘Young boys and girls are now healthy and none have died since we got water. We are so happy with the donors who thought of our suffering. Thank you, thank you.’

‘We are going to bring a school and health facility here because of this water,’ added Chief Simon.

Not only are the people healthier but the tribe’s animals are also thriving and wild fruits have begun to grow once more. One village elder said he hopes to start rearing sheep again after they all died in the drought.

Because the tribe’s basic need for water has now been met thanks to the borehole, the women are starting to think of business ideas and options for sending their children to school.

Chief Executive of SPANA, Geoffrey Dennis, who travelled with MailOnline to visit the project, said: ‘We need to think about the long-term because clearly, this is so successful that you’re actually getting different villages coming into this area for water.

‘In time we may need to think about other similar projects in surrounding areas because it’s going to attract many people. There have been conflicts in the past and we need to be aware that this could happen in the future.’

SPANA receives no government funding but Mr Dennis believes the UK government ‘should do more’.

‘If this area continues with very few rains for the next few years, which it probably will, there will be a lot of people who start drifting towards Nairobi and people will think “let’s move to Europe” or wherever, so I very strongly encourage people to support people in the communities and keep them there.’

‘I hope we can have more projects similar to this, the people are amazing they are really friendly people, I have high hopes that we will develop happy communities that actually have a good livelihood and that’s exactly what we saw here,’ he added.

One striking mother-of-six, named Atir Acheme, summed up the mood of the village as she told us: ‘I’m happy because no one is thirsty here, even our livestock.

‘Our children are lively and playing. We have no problems like before.’

Pointing to her beautiful patterned blue dress, she added: ‘I used to not dress like this, look at me now.’

This article appeared on MailOnline. Click here for the full set of images.