QUITO — On the floor of a secret room hidden behind a bookshelf are the words of Anne Frank translated into Spanish: “In spite of everything, I still believe that people are really good at heart.”

This escape room – constructed out of a lingering fear of Nazi persecution – is not in Europe. It’s in Ecuador.

Auschwitz survivor Trude Sojka built the hiding place and stocked it with supplies years after she was liberated by Russian soldiers from a Nazi concentration camp in 1945.

Today it is open to the public at the Casa Cultural Trude Sojka (Trude Sojka Cultural House) in Quito, a museum and gallery dedicated to victims of genocide and the life of the Czech artist who lived in the house until her death at the age of 97.

“She never spoke about what happened, which I think is the same as many survivors,” her daughter, Anita Steinitz, says as we stand inside the cramped, dark, room.

Anita, an art historian, has added lights and fixed haunting images from the Holocaust on the room’s walls but it otherwise remains in its original form: a symbol of the continued anxiety her mother felt despite moving almost thousands of miles from Nazi Germany across the Atlantic.

In the corner of the room, sits one of the first sculptures Trude created after arriving in Ecuador.

It’s a bleak self-portrait of her as a new mother, holding her baby girl tenderly in her arms. The baby’s life was devastatingly short.

Seven months after she was first captured in Prague and taken to Auschwitz with her husband, Dezider Schwartz, and mother, Hedwig Baum, Trude – then aged 35 – gave birth to her daughter, Gabriele Evelin Schwartz, on May 4 ,1945.

By that time, the artist was being held in a type of maternity ward for pregnant Jewish women in a concentration camp near the town of Zittau, Germany.

A Soviet air raid on Zittau on May 7, 1945, set Trude free but a few weeks later, on May 29 – after Nazi Germany had surrendered – baby Gabriele died.

A letter from a doctor in Zittau, displayed inside the museum, dated 30.05.1945 registered her baby’s death. “She died of malnutrition and a skin disease,” Anita says of the child, who would have been her half-sister.

It says she was next transferred to Sakisch-Kudova (Kudowa-Sackisch) labour camp, one of up to 100 subcamps of the Gross-Rosen network in eastern Germany, Czechoslovakia, and occupied Poland. She was forced to work there from 1.11.1944 – 15.03.1945.

Once her pregnancy was noticed, she was moved to the so-called maternity ward at Zittwerke-Kleinschönau concentration camp near Zittau, where she is listed as being held from 15.03.1945 – 11.05.1945 (three days after Nazi Germany’s unconditional surrender).

Anita says her mother only survived the Holocaust because she was transferred from Auschwitz to one of the Gross-Rosen labour camps.

Many of the prisoners worked in a huge stone quarry and once she escaped, Trude spent the rest of her life creating art from concrete. “She took a material that caused so much pain and made it beautiful,” Anita explained.

Born in Berlin in 1909 to a Czech family and raised in Prague, Trude was already an established artist before the outbreak of World War II.

When the Soviet soldiers liberated her in May 1945, she asked to be taken back to her home in Prague to find her family.

She discovered her mother and sister had been killed and her husband was still missing. Her father had died some years previously from a heart attack.

The only ray of hope was a letter from her elder brother Waltre via the Red Cross. He had been living in Ecuador since 1938. He pleaded with Trude to join him.

Trude spent another year looking for her husband in Prague while saving up money for the passage to Ecuador.

In 1946, she set off on the three-month boat journey to Ecuador, carrying a huge sense of survivor’s guilt with her. 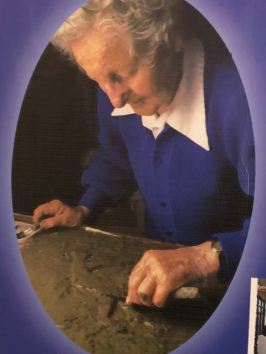 Trude as a young woman and with her granddaughter

When she arrived in the hot and humid port city of Guayaquil, she was greeted by her brother and later met his good friend, Hans Steinitz.

Like Trude, Hans had survived the Holocaust. He and his mother were captured during the Kristallnacht or  “night of broken glass”, November 9–10, 1938, when the Nazis tried to shatter Jewish existence in Germany. Jewish businesses, hospitals, homes, schools, synagogues, and cemeteries were attacked and some 30,000 Jewish males arrested.

Hans and his mother were taken to Sachsenhausen concentration camp. His mother was then deported to Breslau, in Poland, where she died in 1942.

However, Hans escaped Sachsenhausen in December 1938, thanks to the honorary consul of Ecuador in Bremen who got him a visa to emigrate and work in a cotton company in Guayaquil.

When Hans and Trude met in 1946, he helped her continue her search for her missing husband Dezider for another two years. But as Dezider’s death became undeniable, these two Holocaust survivors – who found themselves together in Ecuador – fell in love.

In 1948, they married and built the beautiful house in the Quito neighbourhood of La Floresta that is now the Trude Sojka Cultural House. They also built and stocked the escape room.

The couple had three daughters, Eva Grace, Miriam and Anita, and Trude began to recover from the unimaginable horrors she witnessed and experienced by expressing herself through art.

“Like a phoenix, she rose from the ashes,” says Anita, as she shows me how her mother’s paintings changed in mood and subject as she grew older and happier.

Trude’s photograph in the entrance of the house

In 1948, she painted ‘Liberacion De Auschwitz’ using acrylic and cement on wood. The texturised image shows a figure in various positions from the ground up, finally standing tall with its arms to the sky as it is freed. The metal bars of the concentration camp are seen in the top left corner.

Another of Trude’s paintings actually represents the rebirth of the phoenix. She drew its nest burned as a spiral motion, an indefinite circle between life and death. The vigorous and multicoloured brushstrokes represent the hope she believed should never die. The bird points its beak towards the sky.

“Sojka, the surname of Trude, is a Czech word that means a bird of the forests,” a caption reads beside the photo. In English, the bird is known as a Eurasian jay.

Anita has broken down her mother’s work into three rough time periods. The first covers the Holocaust with elements of freedom, hope, and redemption. The second is centered around Trude’s fascination with Ecuador and its indigenous culture and the third is her “happy” stage, with artwork looking back on positive family memories and depicting fairytale-like scenes.

Trude created more than 1,000 sculptures and paintings in Ecuador and continued to create art with her bare hands from recycled materials until her death in 2007.

“She was ahead of her time,” Anita says, as she highlights how her mother recycled an old clutch from a car motor in one sculpture and used handles from glass vases as the rib cage of an elephant in another.

Trude loved elephants, she respected their strength and wisdom, Anita explains. And like the old saying, “Elephants never forget,” Trude would never forget the horrors of the Nazi concentration camps she was held in.

But through her art she had an outlet for her trauma and in the end she died peacefully, a happy woman, in Ecuador. Aged 97.